In the entity-component-system pattern, a component is a reusable and modular chunks of data that plugged into an entity to add appearance, behavior, and/or functionality. As an abstract analogy, if a smartphone were defined as an entity, we might use components to give it appearance (color, shape), to define its behavior (vibrate when called, shut down on low battery), or to add functionality (camera, screen). In A-Frame, a component modifies entities which are 3D objects in the scene.

Try to contain most logic within components in A-Frame experiences, even if the logic is one-off or ad-hoc. This encourages reusability, modularity, and sharing of code.

Components provide all of the features and extensibility of A-Frame. There is a lot to cover:

A component holds a bucket of data in the form of one or more component properties. This data is used to modify the entity. Consider an engine component, we might define properties such as horsepower or cylinders.

Abstract representation of a component by @rubenmueller of The VR Jump.

In A-Frame, we attach and configure a component to an entity using an HTML attribute for a component name and a inline-style-like syntax for the properties:

For a component that takes a single flat property value, it looks like a normal HTML attribute:

A component is registered using AFRAME.registerComponent, which we pass a component name to register a component under and a component definition. Below is the outer skeleton for the position component:

A component defines a schema that defines its properties, giving anatomy to the component. The position component takes a flat vec3, or an {x, y, z} object.

Then a component defines lifecycle methods that handles what it does with its data, giving physiology to the component. During initialization and on attribute updates, the position component takes its vec3 value and applies it to its three.js Object3D:

Components will often be talking to the three.js API.

All properties have property types. Property types define how the component parses incoming data from the DOM, and they prescribe a default value if one is not defined in the property definition. A-Frame comes with several built-in property types such as boolean, int, number, selector, src, string, and vec3.

Each type assigns a parse and a stringify function. Parsers deserialize the incoming string value from the DOM to be put into the component’s data object. Stringifiers serialize values back to the DOM when calling setAttribute with a non-string value. Alternatively, we can define our own property types by providing our own parse and/or stringify functions.

Property types can either be assigned explicitly, or the schema will infer one given the default value.

Given a default value, the schema will infer a property type and inject a parser and stringifer into the property definition:

And given only a type, the schema will infer a default value:

Single-property schemas define only a single anonymous flat property. They must define either a type or a default value to be able to infer an appropriate parser and stringifier.

For example, the rotation component takes a vec3:

And for example, the visible component takes a boolean:

Multi-property schemas it consists of one or more named property definitions. Unlike single-property schemas, each property has a name. When a component has properties then the HTML usage syntax will look like physics="mass: 2; velocity: 1 1 1".

The handlers will almost always interact with the entity. We recommend checking out the Entity documentation.

init is called once in a component’s lifecycle when it is attached to the entity. The init handler is generally used to set up state and instantiate variables that may used throughout a component. Not every component will need to define init. It is similar to createdCallback or React.ComponentDidMount.

For example, the look-at component‘s init handler sets the state of the target to null and instantiates a Vector object:

Example uses of init by some A-Frame components:

For example, the visible component’s update handler toggles the visibility of the entity:

Example uses of update by some A-Frame components:

remove is called when a component detaches from the entity (e.g., as a result of removeAttribute). This is used to remove all modifications, listeners, and behaviors to the entity that a component has added in its lifetime.

For example, when the light component detaches, it removes the light it previously attached to the entity:

Example uses of remove by some A-Frame components:

tick is called on every single tick or render loop of the scene. Expect it to run on the order of 60-90 times per second. The global uptime of the scene in seconds is passed into the tick handler, which is used to calculate time deltas.

For example, the look-at component’s tick handler updates the entity’s rotation to face towards a potentially moving target entity:

Example uses of tick by some A-Frame components:

To support pause and play, just as with a video game or to toggle entities for performance, a component can implement the play and pause handlers. These are invoked when a component’s entity calls its play or pause method. When an entity plays or pauses, all of its child entities are also played or paused. A component should implement a play and pause handler if it registers dynamic, asynchronous, or background behaviors such as animations or event listeners.

For example, the [look-controls component]’s play and pause handlers toggles its event listeners for listening to input:

Example uses of pause and play by some A-Frame components:

Let’s build a basic line component that renders a line. We want to make the property API flexible enough to be able to specify the color and vertices:

Here is a skeleton of the component. We’ll just need a schema, a update handler, and a remove handler:

We have two properties we want to accept: color and path. Thus we will need a multi-property schema. The color property will be a simple string that will be fed to THREE.Color. The path property will need a custom parser and stringifier to handle an array of vec3s for the vertices.

The component API is entirely up to us. If we wanted the path to take a different syntax or abstract it further such that it maybe only accepts a starting point and a length and handle the math for the developer, we could do so.

The schema will hand the data to the update handler all parsed and ready to go. Here, we want to create a line geometry if it doesn’t exist yet and update it if it does. We can create a line in three.js by combining a THREE.LineBasicMaterial and THREE.Geometry and then manually pushing vertices.

Here, we update the line by completely replacing it. Though sometimes, we might want to more granularly update objects for better performance.

For removal of the line mesh from the entity, we use Entity.removeObject3D:

This will remove the object from the entity’s scene graph.

Then with the line component written and registered, we can use it in HTML: 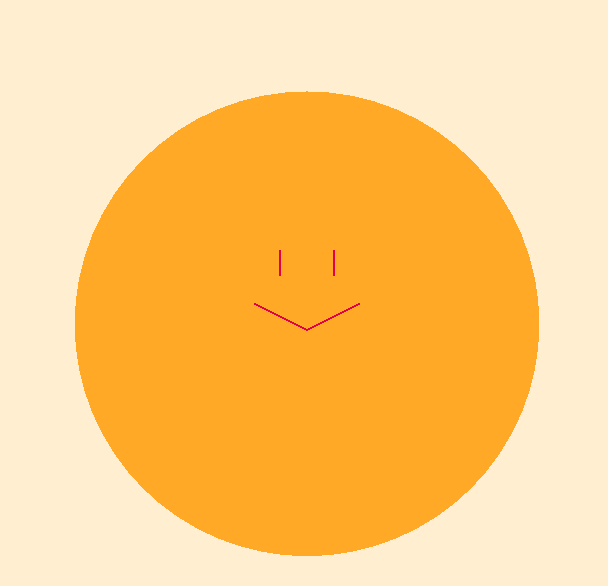 Happy face with the line component! Play with it on Codepen.